We respect your inbox. We only send interesting and relevant emails.

WE believe dreams are promises to be kept...

Three Reasons Why This is NOT a Housing Crisis 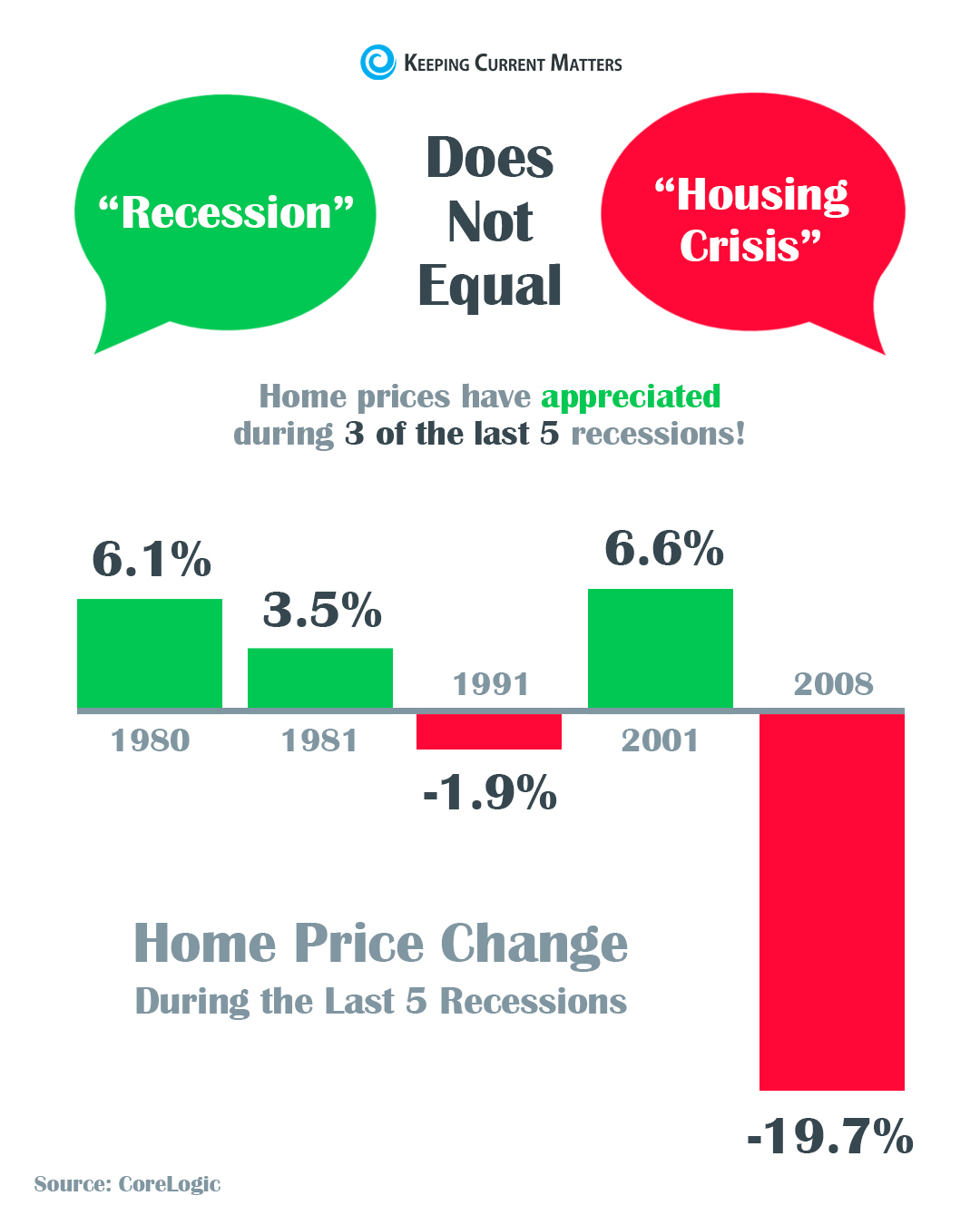 1. The Market Today Is Vastly Different from 2008

We all remember 2008. This is not 2008. Today’s market conditions are far from the time when housing was a key factor that triggered a recession. From easy-to-access mortgages to skyrocketing home price appreciation, a surplus of inventory, excessive equity-tapping, and more – we’re not where we were 12 years ago. None of those factors are in play today. Rest assured, housing is not a catalyst that could spiral us back to that time or place.

According to Danielle Hale, Chief Economist at Realtor.com, if there is a recession:

“It will be different than the Great Recession. Things unraveled pretty quickly, and then the recovery was pretty slow. I would expect this to be milder. There’s no dysfunction in the banking system, we don’t have many households who are overleveraged with their mortgage payments and are potentially in trouble.”

In addition, the Goldman Sachs GDP Forecast released this week indicates that although there is no growth anticipated immediately, gains are forecasted heading into the second half of this year and getting even stronger in early 2021. 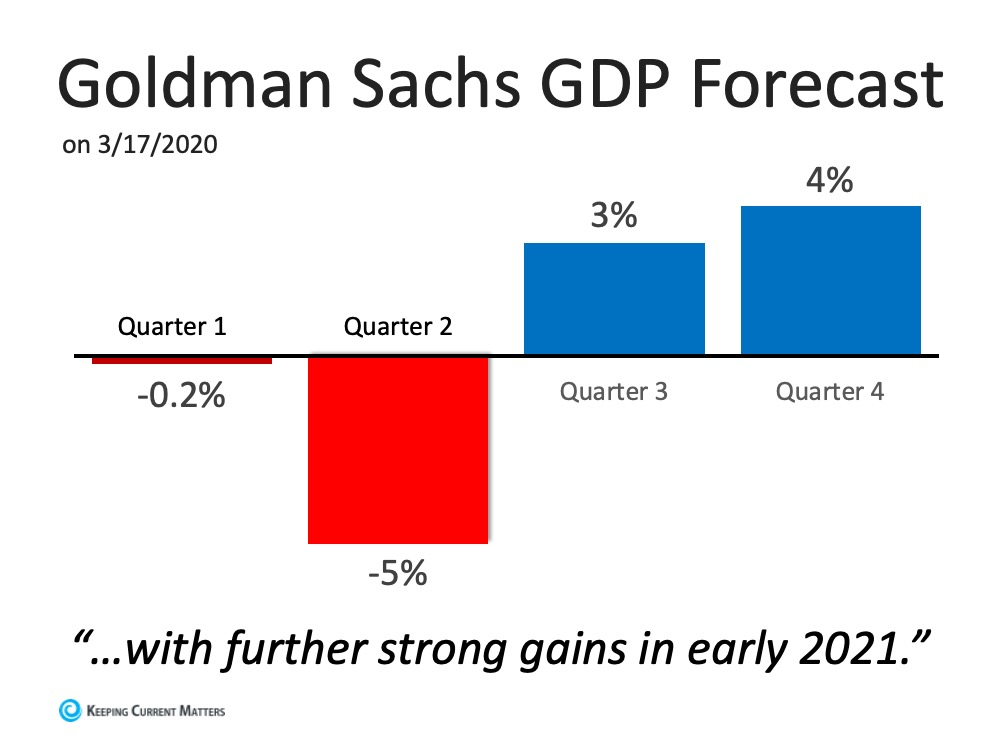 Both of these expert sources indicate this is a momentary event in time, not a collapse of the financial industry. It is a drop that will rebound quickly, a stark difference to the crash of 2008 that failed to get back to a sense of normal for almost four years. Although it poses plenty of near-term financial challenges, a potential recession this year is not a repeat of the long-term housing market crash we remember all too well.

2. A Recession Does Not Equal a Housing Crisis

Next, take a look at the past five recessions in U.S. history. Home values actually appreciated in three of them. It is true that they sank by almost 20% during the last recession, but as we’ve identified above, 2008 presented different circumstances. In the four previous recessions, home values depreciated only once (by less than 2%). In the other three, residential real estate values increased by 3.5%, 6.1%, and 6.6% (see below):

With all of the volatility in the stock market and uncertainty about the Coronavirus (COVID-19), some are concerned we may be headed for another housing crash like the one we experienced from 2006-2008. The feeling is understandable. Ali Wolf, Director of Economic Research at the real estate consulting firm Meyers Research, addressed this point in a recent interview: 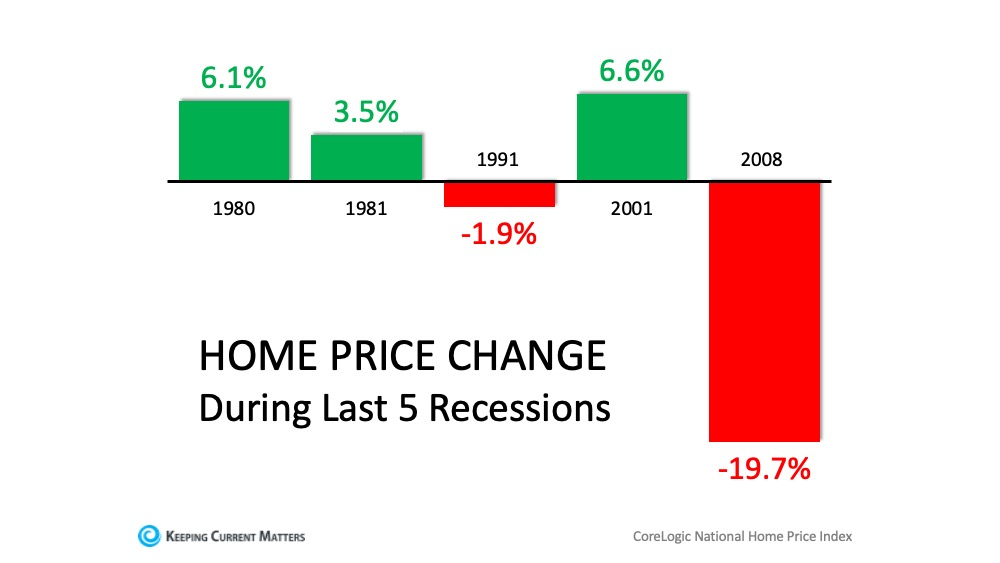 3. We Can Be Confident About What We Know

Concerns about the global impact COVID-19 will have on the economy are real. And they’re scary, as the health and wellness of our friends, families, and loved ones are high on everyone’s emotional radar.

“Several economists made clear that the extent of the economic wreckage will depend on factors such as how long the virus lasts, whether governments will loosen fiscal policy enough and can markets avoid freezing up.”

That said, we can be confident that, while we don’t know the exact impact the virus will have on the housing market, we do know that housing isn’t the driver.

The reasons we move – marriage, children, job changes, retirement, etc. – are steadfast parts of life. As noted in a recent piece in the New York Times, “Everyone needs someplace to live.” That won’t change.

5 Simple Graphs Proving this is NOT Like the Last Time

With all of the volatility in the stock market and uncertainty about the Coronavirus (COVID-19), some are concerned we may be headed for another housing crash like the one we experienced from 2006-2008. The feeling is understandable. Ali Wolf, Director of Economic Research at the real estate consulting firm Meyers Research, addressed this point in a recent interview:

“With people having PTSD from the last time, they’re still afraid of buying at the wrong time.”

There are many reasons, however, indicating this real estate market is nothing like 2008. Here are five visuals to show the dramatic differences.

1. Mortgage standards are nothing like they were back then.

During the housing bubble, it was difficult NOT to get a mortgage. Today, it is tough to qualify. The Mortgage Bankers’ Association releases a Mortgage Credit Availability Index which is “a summary measure which indicates the availability of mortgage credit at a point in time.” The higher the index, the easier it is to get a mortgage. As shown below, during the housing bubble, the index skyrocketed. Currently, the index shows how getting a mortgage is even more difficult than it was before the bubble. 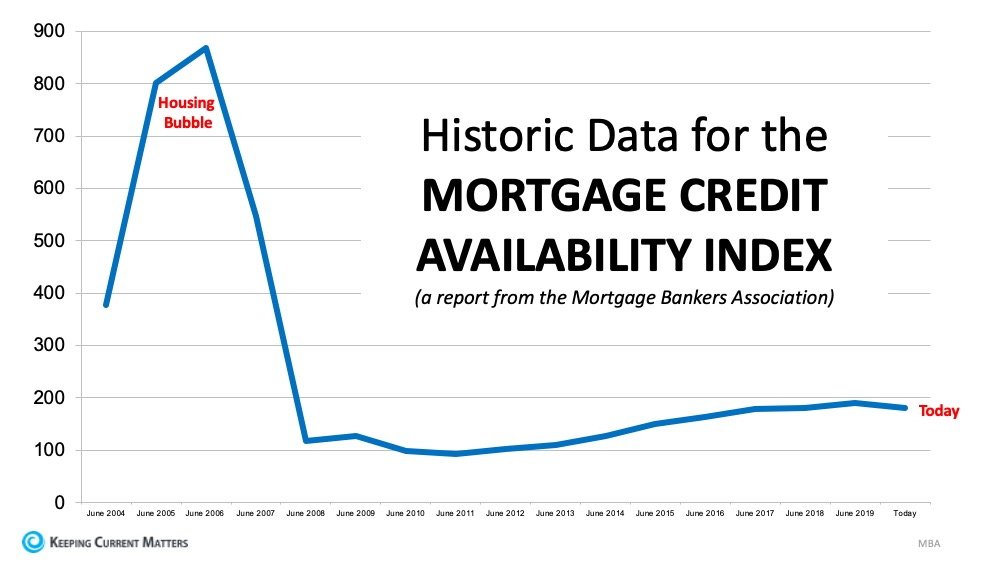 2. Prices are not soaring out of control.

Below is a graph showing annual house appreciation over the past six years, compared to the six years leading up to the height of the housing bubble. Though price appreciation has been quite strong recently, it is nowhere near the rise in prices that preceded the crash. 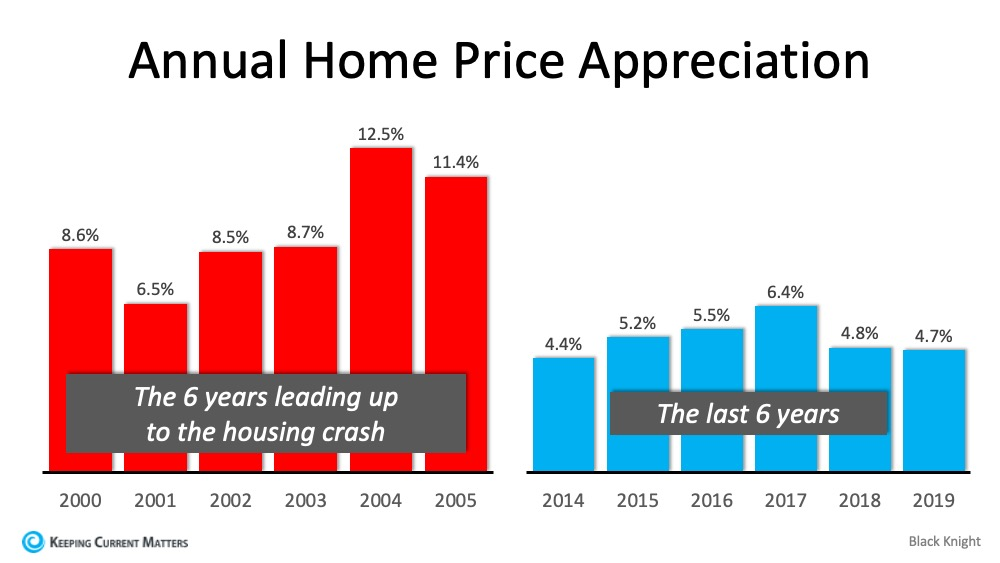 There’s a stark difference between these two periods of time. Normal appreciation is 3.6%, so while current appreciation is higher than the historic norm, it’s certainly not accelerating beyond control as it did in the early 2000s.

3. We don’t have a surplus of homes on the market. We have a shortage.

The months’ supply of inventory needed to sustain a normal real estate market is approximately six months. Anything more than that is an overabundance and will causes prices to depreciate. Anything less than that is a shortage and will lead to continued appreciation. As the next graph shows, there were too many homes for sale in 2007, and that caused prices to tumble. Today, there’s a shortage of inventory which is causing an acceleration in home values. 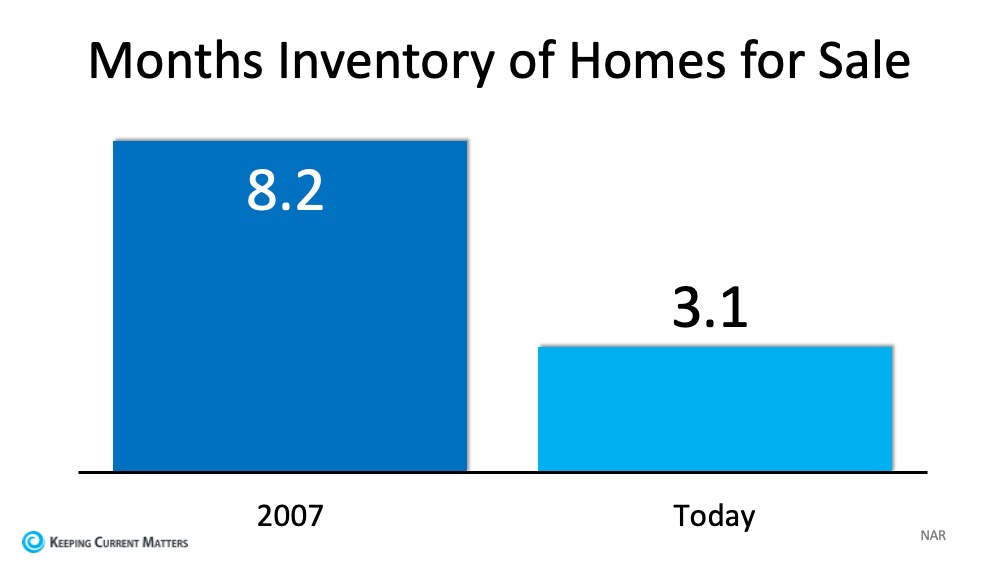 4. Houses became too expensive to buy.

The affordability formula has three components: the price of the home, the wages earned by the purchaser, and the mortgage rate available at the time. Fourteen years ago, prices were high, wages were low, and mortgage rates were over 6%. Today, prices are still high. Wages, however, have increased and the mortgage rate is about 3.5%. That means the average family pays less of their monthly income toward their mortgage payment than they did back then. Here’s a graph showing that difference: 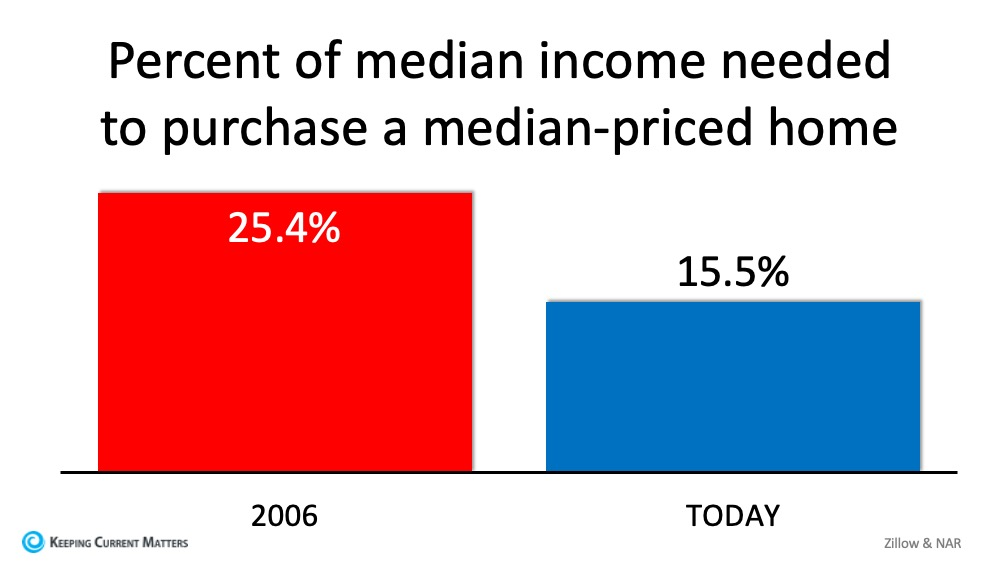 5. People are equity rich, not tapped out.

In the run-up to the housing bubble, homeowners were using their homes as a personal ATM machine. Many immediately withdrew their equity once it built up, and they learned their lesson in the process. Prices have risen nicely over the last few years, leading to over fifty percent of homes in the country having greater than 50% equity. But owners have not been tapping into it like the last time. Here is a table comparing the equity withdrawal over the last three years compared to 2005, 2006, and 2007. Homeowners have cashed out over $500 billion dollars less than before: 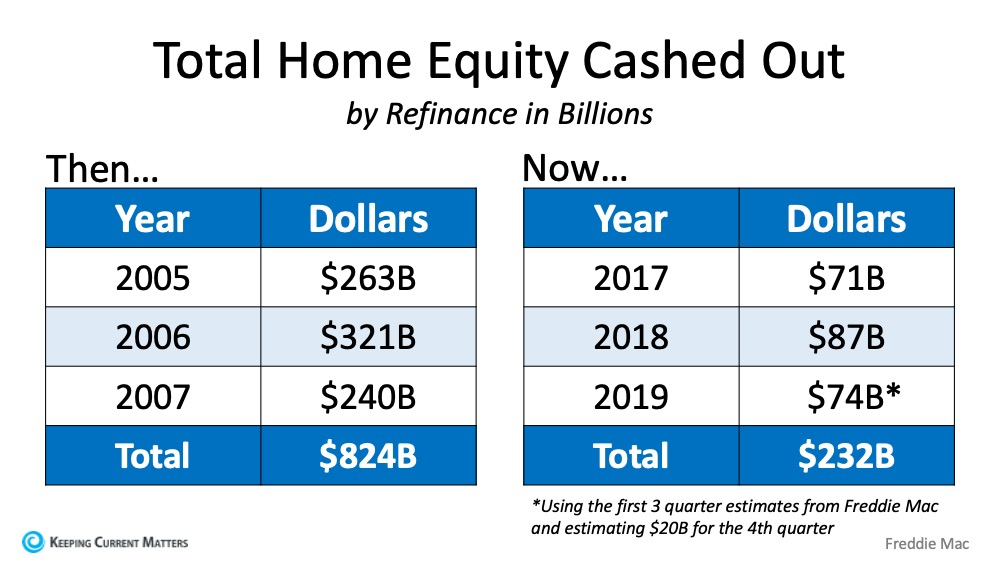 During the crash, home values began to fall, and sellers found themselves in a negative equity situation (where the amount of the mortgage they owned was greater than the value of their home). Some decided to walk away from their homes, and that led to a rash of distressed property listings (foreclosures and short sales), which sold at huge discounts, thus lowering the value of other homes in the area. That can’t happen today.

If you’re concerned we’re making the same mistakes that led to the housing crash, take a look at the charts and graphs above to help alleviate your fears.

Concerns about a recession are real, but housing isn’t the driver. If you have questions about what it means for your family’s homebuying or selling plans, reach out to Tim or Sandy here at Jones Team Colorado to discuss your needs.

We also have a detailed White Paper from Megan Aller at First American Title detailing her insights.  We can email you a PDF copy.

We respect your inbox. We only send interesting and relevant emails.

We use cookies to enhance your browsing experience and deliver our services. By continuing to visit this site, you agree to our use of cookies. More info